Getting Circular With SDL Audio

Getting Circular With SDL Audio

Eric Scrivner Technical, Tips Oct 7, 2017 Comments Off on Getting Circular With SDL Audio

Recently I’ve been having a lot of fun following along with Casey Muratori’s Handmade Hero project. As far as I know this is the first time a seasoned game industry vet like Casey has graciously decided to share the step-by-step creation of a professional-quality game. Amazingly, he’s also been including videos detailing every line of code and every major architectural decision.

However, following along with the code examples can be tough if you’re not on a Windows machine. In my case, early on I decided to replace the DirectX dependencies with Simple DirectMedia Layer (SDL). SDL is a library I’ve used for years and have found to be a reliable tool for building audio/visual applications and games across Windows, macOS, and Linux.

Unfortunately, it seems to be a rule that no two interfaces to graphics or sound cards can quite function the same way. This means that mapping DirectX code onto the SDL APIs can sometimes require quite a bit of leg work.

In particular, episodes 008 and 009 where Casey shows us how to play a square and sine wave using DirectAudio have no immediate equivalents in SDL. However, with some work it is easily possible to translate them into an SDL equivalent, and even set ourselves up for a multithreaded implementation.

We’ll start with some background on how computer sound generation works in general, then move on to SDL specifics, and end with an the implementation of a circular buffer for async audio playback in SDL. 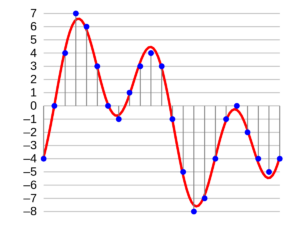 Almost all digital devices generate audio using some variant of a method known as Linear Pulse-code Modulation (LPCM). LPCM generates sound from a digital signal by streaming a set of quantized digital values representing amplitudes from memory out to an analog speaker. The sound card samples from this stream at a regular interval, called the sampling rate, and – if sampled fast enough – can generate any sound you want within its tolerances. In the image to the left you can see how such sampling approaches a continuous analog signal – the more dots (LPCM samples) we can squish into a given span of time, the higher the fidelity to the original signal.

LPCM signals are typically digitally represented by 8, 16, 24, or 32 bit values (called the bit depth of the signal). Samples can also be monoaural (1 channel) or stereo (2 channels). Depending on the number of channels, the sound card will either grab 1 or 2 values per sample. With a monoaural sample, it will one value and mirror it on both speakers. With a stereo setup it will grab two values – one for the left speaker and one for the right speaker. The table below summarizes this point (assuming a 16-bit depth):

We can then write our callback to place raw LPCM samples into the audio buffer whenever it is called. The following example will play a square wave:

Our platform_audio_settings data structure would look something like the following:

All of this looks pretty familiar and straightforward given our explanation of LPCM above. However, there is one big problem with this, and with SDL’s audio system in general. The use of a callback method to fill the audio buffer is quite different from the circular buffer design of DirectX. This difference is large enough that it makes mapping the Handmade Hero examples onto SDL fairly tricky.

To bridge this gap, it would be helpful if we could simply mimic the circular buffer of DirectX by hand and play its contents out from within the SDL callback.

There is an additional benefit to using a circular buffer that makes it particularly worth pursuing. A circular buffer gives us a clean separation of the platform independent audio components (buffer writing) from the platform dependent audio components (buffer reading / audio playback). Before we hop into the implementation, let’s review circular audio buffers to get a sense for what we’ll be writing.

A circular audio buffer is a chunk of memory along with two pointers into that memory – a ReadCursor and a WriteCursor. These cursors are initialized such that the WriteCursor is slightly ahead of the read cursor (typically by 1 sample). This necessary to completely initialize the buffer on the first writing pass, and also simplifies the logic of the actual implementation. If you’d like to explore this more, experiment with starting the ReadCursor and WriteCursor off and the same position and listen to what happens to the audio playback as a consequence.

What makes such a buffer “circular” is that either pointer will simply wrap around and start from the beginning should it ever reach while it is doing its thing (reading or writing). This allows you to maintain the illusion of a continuous “stream” data within a fixed size chunk of memory.

Audio playback simply copies as much data as it needs starting from the ReadCursor. When it is done it advances the ReadCursor to the position following the byte it last read.

SDL Audio With A Circular Buffer

To implement such a circular audio buffer in SDL, it would first help to revisit our callback. Assuming we had some UserData that provided us a link to the circular buffer, how would we feed that to the sound device from the callaback. The following is one possible way:

As you can see this handles both cases when reading from the buffer, copying two separate regions if necessary. SDL_memcpy is smart enough to know to do nothing if we request it copy 0 bytes.

Writing to the buffer must also deal with the Region1 and Region2 logic. We can, however, generalize the idea of playing a sample to fill the circular buffer, isolating a lot of the logical complexity:

We can also cook up a simple data structure to contain the necessary fields supporting these two methods:

Now all we need to do is define some sampling functions we can use to feed our buffer. Let’s do one for the square wave and one for the sine wave:

Now, in the main loop of our program we just regularly write data into the audio buffer. As a side note, we need to avoid race conditions by locking our audio device to ensure the audio callback isn’t executed until the buffer writing is done:

You can find a full working example here.

This was a lot of fun to write and occasionally quite frustrating to debug, however it forced me to finally learn about LPCM and SDL Audio in the process. Thank you for reading along if you made it this far. As always if you have any questions / comments / concerns, feel free to post 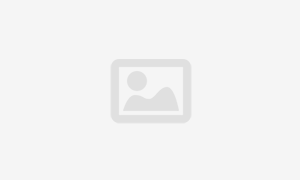